partypoker
Trusted
This article was added by the user Ethan Carter. TheWorldNews is not responsible for the content of the platform. 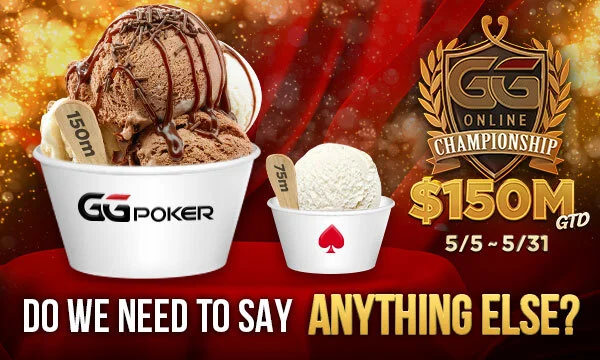 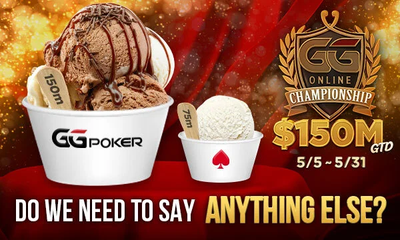 With the live World Series of Poker (WSOP) just around the corner, May is a big month on the online streets. GGPoker is leading the way with a massive $150 million guaranteed GG Online Championships.

GGPoker is going head-to-head with rival PokerStars’ Spring Championship of Online Poker (SCOOP) and the upstart operator has been poking some fun at its competitor recently. With $78.5 million in guarantees, the long-running SCOOP series is about half the size of the GG Online Championships and a recent tweet from GG brought that home in a humorous way.

🤔 So, what’s YOUR favorite double?

The series has 131 tournaments in each of three categories — High, Medium, and Low — plus another 20 games in the Super-High category. Most of the prize guarantees are reserved for the High games, with a bit more than 40% of the $150+ million in guarantees on those games.

GG Online Championship at a Glance

While the GG Online Championships got underway a little earlier than PokerStars’ SCOOP, the two tournaments are essentially running side by side this May and GGPoker is clearly looking to make its series bigger than SCOOP. The overall guarantees for GGOC are twice as big as those for SCOOP, despite only running about 33% more tournaments over the series.

The average guarantee for the GGOC is also about 33% higher than the same average on SCOOP, with the biggest guarantee double that of SCOOP. There are more than 45 tournaments in the GGOC that guarantee more than $1 million, and that compares to just 10 $1+ million games in SCOOP.

It will cost players significantly more to play every event in GGOC. While players can play every game in the PokerStars’ SCOOP schedule for $231,009, they’ll need more than 3x that much, or $710,267, to get into all the GGOC games.

How Has the Two Series Fared So Far?

The GGOC completed its fourth day last Sunday and has generated almost $20 million in prize money already (excluding the prize pools and turnouts on MTTs with Day 1s). The Bounty Hunters HR Main Event with a buy-in of $525 has, thus far, produced the biggest prize pool generating $1.61 million.

PokerStars’ SCOOP on the other hand had its first day last Sunday and it is off to a flying start. The first day produced $6.4 million in prize money and close to 100,000 entries. The Sunday Million returning to its $215 buy-in amassed the biggest prize pool thanks to a turnout of almost 8000 entries and final outcome of $1.59 million.

GGOC vs SCOOP — How Have They Fared?

* MTTs with Day 1s have been excluded for the comparison.

That Circuit event had nearly 1,000 tournaments to make the guarantee, while the GGOC is running about half that many, with somewhat larger buy-ins. Perhaps a better comparison is to last year’s $150 million guaranteed GG Spring Festival which ran Apr 4 to 25, 2021.

That series saw just 335 games across 21 days, with a slightly higher average guarantee. On the other side of the coin though, this year’s GGOC has seven more $1+ million guaranteed events.

Biggest Value is the Mystery Bounty

A new addition to the schedule for this year is the Mystery Bounty games. There are two Mystery Bounties at each of the Low, Medium, and High buy-in levels, with $500k, $1 million, and $2 million guaranteed respectively. The Low games are especially juicy — with a buy-in of just $25 and guarantees of $500,000, the two Low Mystery games are the best value across the entire series.

GGPoker is certainly shooting for the stars with this series, but, given the past performance of similar series, it looks like the operator will likely reach its lofty goals. Games are running now on GGPoker (find the full schedule here) and will continue through the end of May, while PokerStars’ SCOOP festival kicks off Sunday, May 8th.