partypoker
Trusted
This article was added by the user Lily Green. TheWorldNews is not responsible for the content of the platform.

Hawkins Says “I Will Pay Him When I Can” After Backer Calls Him Out… Again! 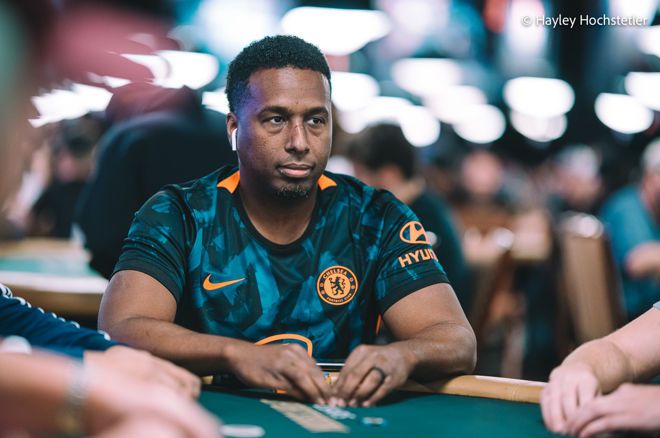 Three years ago, Randy Garcia called out poker pro Maurice Hawkins, the World Series of Poker (WSOP) Circuit’s all-time leading ring winner, for failing to live up to a backing agreement. At the time, a final judgment was issued by the Circuit Court of the 15th Judicial Circuit in and for Palm Beach County, Florida. Case No. 502019CA000052XXXXMB awarded Garcia a $115,828 judgment.

When first reported, Garcia said, “My lawsuit against Maurice Hawkins is currently in the process of being amicably resolved.”

That no longer appears to be the case as Garcia has once again called out Hawkins for failing to make good on their agreement, this despite the 14-time ring winner, who according to the Hendon Mob has nearly $4.4 million in career earnings, having recently topped a field of 194 entrants to win the 2022 Seminole Hard Rock Poker Showdown Event #8: $400 Black Chip Bounty for $7,895 back in March.

According to Garcia, he has only been paid back roughly $10,000 over the course of four years.

“I will pay him when I can,” Hawkins told PokerNews in regard to the latest accusation. He also claimed repayment is closer to $35,000 (he provided PokerNews with receipts allegedly showing approximately $20,000 in payments). “I got more things in life to worry about than others’ perception of me.”

Garcia is Fed Up

Garcia recently spoke with PokerNews about the situation, which has now spanned more than half a decade.

“He has probably paid me back around $10k or over four years all while cashing for well over a million,” he said. “We come to terms with payment plans agree on it then will pay the first month or two and then comes the excuses and can't pay anymore.”

"I don't wish ill will on anyone as I know he has a family and kids, but so do I. Bottom line is we had a deal and he screwed me over."

He added: “When it came to paying me back he has zero respect for me and my family. He couldn't even make an effort to pay me back even $100 a month as a sign of good faith and to show some kind of effort yet he still continues to buy into tournament after tournament. I was there for him personally and professionally when he needed me, but he decided to screw me over again and again and so enough is enough. I don't wish ill will on anyone as I know he has a family and kids, but so do I. Bottom line is we had a deal and he screwed me over.

“Maurice has screwed over so many people. He tries to act like a tough guy at the table by constantly talking down and degrading people like he is the best poker player there is. Who cares if he has 14 rings if he is broke. I think the poker community should kick Maurice out as he is a jerk to everyone and has lied and screwed so many people over. I have backed other players with zero issues because they have integrity and high character. Maurice has neither. So, he can continue to hit the circuit and act like he is the best there is and degrade people. Things will catch up to him sooner or later, if the court doesn't get him first.” 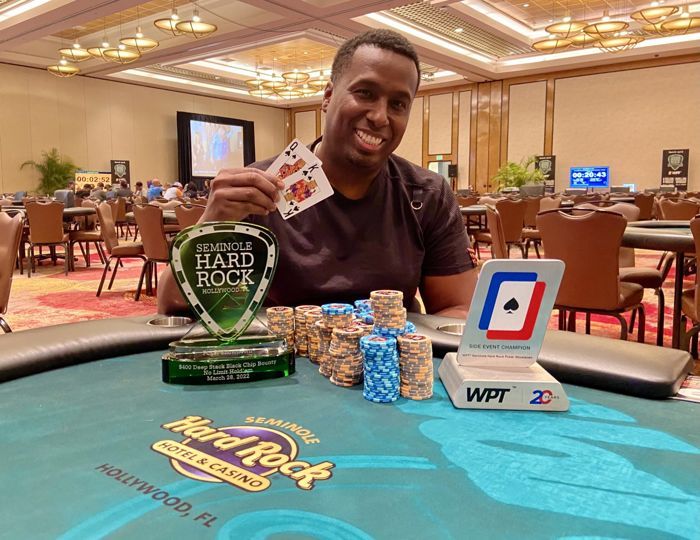 Maurice Hawkins won an event in South Florida back in March.

According to court documents provided to PokerNews, Garcia and Hawkins entered into a forbearance agreement on July 24, 2019, for the latter to pay $2,000 a month plus 15% of the gross winnings as part of a repayment plan. There was also a buy-out option for Hawkins to pay 72.5% of any remaining balance. It appeared Hawkins did make several payments on tournament cashes leading up to mid-2019.

“[We] will look for the payment of $13,028.55 within 7 days. You may want to use this opportunity to make a double payment which will substantially reduce your total obligation. If it at least the agreed payment is not received, my client will consider you the Forbearance Agreement and will no longer be bound by any confidentiality restriction.”

Hawkins pointed out that he fired two bullets in the tournament so a more accurate amount was $12,774. Despite that, on September 1 he emailed the following:

"I am emailing to inform you that. My previous arrangement is not doable with my income and business arrangement. What is doable is 2500 a month to be paid on the 1st or every month, only. Talk this over with you client and draw up the same agreement, with the same language before. Just input you are to be paid 2500 a month. I will pay the 2500 this month and every month following. Include the pre-payment ability with the discount. If this deal if not paid off prior would take roughly 3 years. This is not a negotiation or a ploy. To be clear I am trying to pay you what I can.”

I have spoken with my client. Obviously, he is apoplectic that you keep making, and then breaking, your commitments. You first had an arrangement to pay one half of your earnings and didn’t follow through. You then worked out a payment plan, and didn’t follow through. We negotiated a post judgment settlement and you have made over $200k in earnings, but have paid next to nothing. Now you want to return to the paying a small, no interest, monthly sum. I can only assume that other creditors have threatened your life if you don’t pay them first.

So here is what my client is willing to do:

Let me know today, or I have been instructed to move forward with the lawsuit. Please understand that Mr. Garcia is now freed from the confidentiality provisions of the agreement because of your violations.

Both parties negotiated further and appeared to come to an understanding. Then, on September 13, Blumberg offered Hawkins an alternative.

“Because of a medical emergency in his family, Randy Garcia has informed me that he is willing to accept $60,000.00 in full settlement of your judgment. This would save you approximately $55,000.00, almost half. The settlement funds must be paid immediately given the situation. Mr. Garcia has explicitly stated that he will not entertain any counter-offers.”

“If I win something in the next week I will keep this in mind,” Hawkins replied. Ultimately, he did not take Garcia up on the buy-out offer.

Read about the original judgment against Hawkins here.

No Love Lost Between the Two

Email correspondence provided to PokerNews shows that both Garcia and Hawkins negotiated different repayment plans with the former at times offering a 75% discount to satisfy the debt if Hawkins could make a one-time lump-sum payment. While Hawkins started that was his intention and goal, it never came to fruition.

“You don’t even have the respect the contact me and let me know. You don’t even have the respect to send me $100 a month or show some kind of good faith. You have zero respect for me and my family. It’s been almost 4 years and you give two shits about me. I will proceed to have my judgment against you enforced and will be sure to let the poker community know. I’ve had it. you can find the money to continue to play in tournaments and travel but you can’t pay me not even a penny. You’ll hear from my lawyer and mark my words on this, I will take every measure necessary to continue with the judgment. You are not the tough guy that you portray and I will be sure everyone knows this. You have disrespected me for the last time. See you in court!!!”

Hawkins responded in part: “Stop with your condescending ass email. I going through shit like everyone else. My intention have always been to pay you.”

A day later, Hawkins added: “Oh by the way. So you can be real clear. You are a piece of shit. No matter how you try to destroy me. It’s not going to work. So in the immortal words. F*** YOU.”

Hawkins Responds – “I Will Pay Him When I Can” 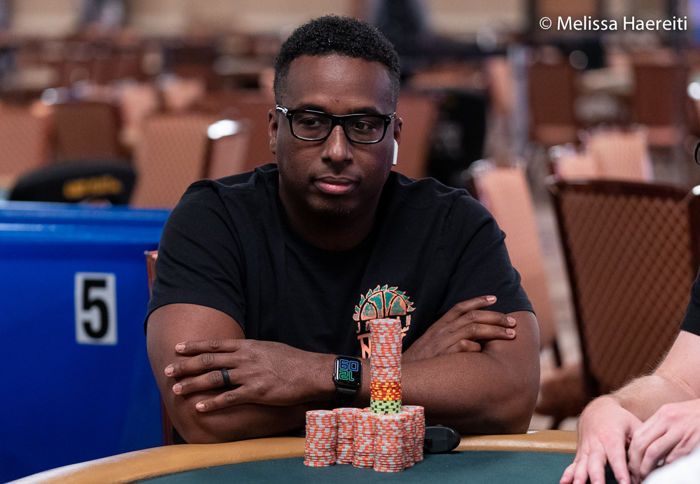 “I paid him as I won and even when I really couldn’t afford it,” Hawkins said when reached by PokerNews. “The fact that you writing articles and not really caring what it does to my lifestyle as a whole is truly sad. Trying to make it as a poker player and have a family is hard enough. So my comment is I am greater than anything you could possibly write to destroy me.”

He added: “Maurice pays his ass when he can. Write the article about a businessman that owns million-dollar restaurants that is trying to end a poker player’s staking abilities and future … At the end of the day he gets to go back home to his stable income while [you try] to end my career.”

“And remember there was COVID in between,” Hawkins pointed out. “His ass is a brat and he wants to be the victim. Ask him if he broke the contract between us. As in he stated he would do one thing but then said his finances had changed … Nobody talks about how the backers are dealing with real people and real lives when they choose to just pull out of deals. Write an article that doesn’t just slander but actually tells the true side.”

Garcia indicated that he will seek to pursue post-judgment collection against Hawkins via legal means. PokerNews will continue to monitor the situation and offer any updates as they happen.