partypoker
Trusted
This article was added by the user Grace Knight. TheWorldNews is not responsible for the content of the platform. 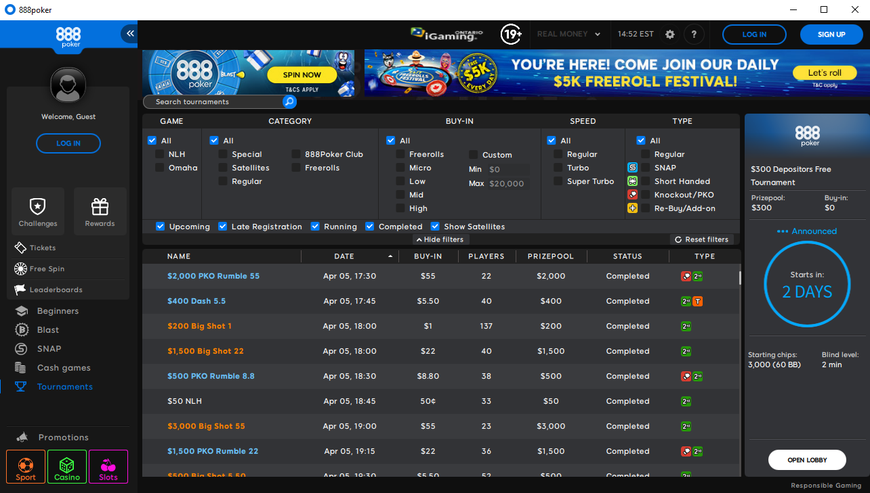 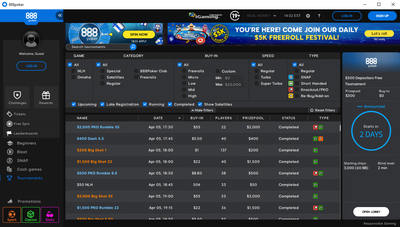 On Monday, 888poker became the first online poker room to go live in the newly regulated market of Ontario, Canada.

It went live with a full slate of games including its BLAST lottery sit and go’s and SNAP — the operator’s fast-fold variant — as well as traditional cash games and tournaments. The only exception was the regular sit and go’s that 888 has not yet co-opted for the Ontario market.

Currently, poker games are segregated from the rest of the world and the player pool is confined to players within the province of Ontario.

Two days post-launch, it is fair to say Ontario tournament players are having a great outing thanks to the huge value being provided in tournaments at 888poker Ontario. Almost every tournament that has run has fallen short of its ambitious guarantees, creating huge overlays.

The first day, in particular, was the best day for players. The Big Shot – 888’s popular tournament brand with a buy-in of CA$55 and CA$3000 guarantee — only managed to attract 22 entries on opening day, collecting CA$1100 in buy-ins and causing a shortfall of CA$1900 — 63% of the guaranteed prize pool. The next day, the tournament did gather more players but still had a shortfall of 43%

The CA$10,000 guaranteed PKO Rumble — a bounty event had the largest overlay. It pulled in 36 entries and fell short by CA$6400. The next day, the same event had another CA$5K+ overlay.

The high roller CA$215 Big Shot, however, was the most valuable in terms of EV. On launch day, the tournament saw only 6 entries — about 70% off from its CA$4000 guarantee. Last night, the same event did much better, only causing an overlay of 5%.

Despite the overlays, 888poker has not backed down and instead of dropping guarantees, the operator has, rather, retained the guarantees in hopes of attracting more players. In fact, the guarantees might have been set deliberately high to incentivize players to sign up.

If the first two days are anything to go by, players can expect to see more overlays in the next few days of the opening week, which means great news for players.

Multiple tournaments are lined up every day with buy-ins ranging from as low as 10 cents to as high as CA$215 (CA$525 on Sunday). These come in a variety of formats and structures including the popular progressive knockouts (PKOs), Pot-Limit Omaha for four-card lovers, turbos & hypers, rebuy/add-ons, regular knockouts, and more.

Each of these MTTs sports a sizable guarantee and, if the first two days are of any indication, most of them can be expected to fall short.

One of the biggest factors for the lack of big turnouts in the tournaments is that the Ontario online poker market is segregated and has no access to shared global liquidity, which these players had been previously enjoying. This could change in the future as iGaming Ontario (iGO) has indicated joining international shared liquidity, but, for now, the Ontario poker market will remain ring-fenced.

Meanwhile, other operators such as PokerStars, GGPoker, and partypoker continue to serve the market from offshore while working with the regulators. 888poker, conversely, is strictly playing by the books.

While, on one hand, Ontario players on 888 lose access to the big prize pools, at the same time, they are enjoying great value thanks to the new 888poker Ontario welcome offers, freerolls, and big overlays in tournaments.

The first Sunday on 888poker Ontario looks to be quite exciting and could offer some juicy overlays. As of now, eight MTTs are deployed with buy-ins ranging from CA$11 to CA$525 for a high roller. The guarantees for these tournaments are set quite high starting at CA$1000 and going up to CA$20,000.

Some of these would need to attract 200 entries to avoid the overlay. The Big Shot Main Event, in particular, looks to be the most valuable. It comes for a buy-in of CA$109 and promises CA$20,000 — the biggest guarantee seen so far in the ring-fenced Ontario online poker market.

In total, CA$50,000 is up for grabs across eight Sunday major MTTs. Satellites are also available to offset the cost of these MTTs with buy-ins starting at just 10 cents.

To help players build their bankrolls, the operator has deployed dozens of freerolls. Each of them gives away at least CA$100 and one even goes up to CA$10,000. The CA$10,000 Freebie Freeroll is definitely not to be missed and it takes place this Sunday, April 10. A Depositors Freeroll is also scheduled to run this Saturday giving away CA$300 in cash prize. Only those that make a deposit in the opening week are eligible for this freeroll.