partypoker
Trusted
This article was added by the user Charlotte Phillips. TheWorldNews is not responsible for the content of the platform. 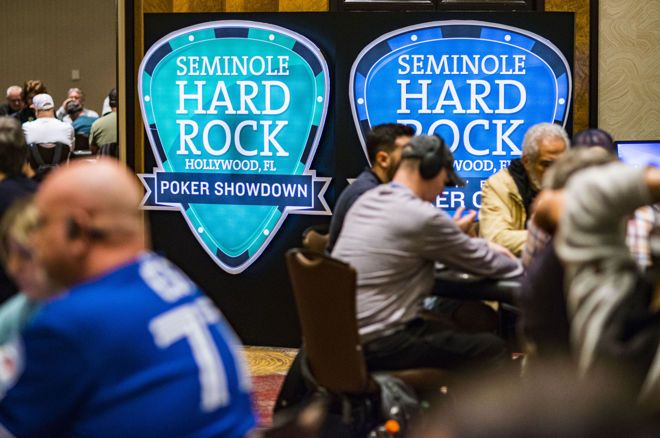 Day 2 of the $3,500 buy-in WPT Seminole Hard Rock Poker Showdown in Hollywood, Florida is winding down on Sunday evening as the field of 659 runners that started the day has been cut to just 99 contenders.

PokerNews has been on-site to capture glimpses of Day 2 action, which kicked off at noon local time with Level 11 with blinds of 1,500/2,500/2,500. Here is some of what took place throughout the action-packed second day of the Championship Event, which will award $1,000,300 to the eventual winner.

During the opening exchanges, ClubWPT qualifier Brett Kunz, who recently got to attend a Miami Heat game with WPT's Vince Van Patten, got the river in a heads-up pot with the board reading

His opponent was first to act and put out a stack of chips to put Kunz all-in. Kunz contemplated and eventually called off for his tournament life with around 40,000 left in his stack. The opponent showed

for rivered trips and the Canadian farmer mucked before leaving his seat. 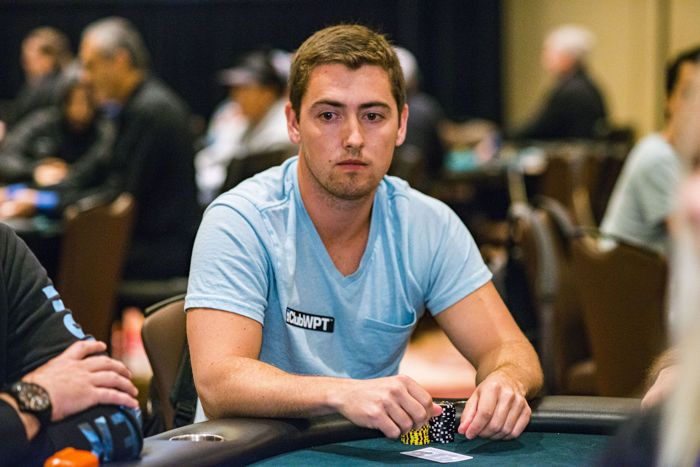 Across the room, poker commentator Nick Schulman opened in early position to play a pot against Cherish Andrews in the big blind. Schulman continued with a bet on the flop reading

and Andrews called, and the same action took place on the

river checked through and Schulman showed he rivered the winner with

Other poker pros battled it out early in the day, including Ian O’Hara and Chad Eveslage, the latter of whom was eliminated during the all-in confrontation against the fellow South Florida pro.

“LuckyChewy” spoke with PokerNews during the first break about his victory earlier this week in Event #31: $50,000 Super High Roller that earned him $638,223.

"It was an amazing experience,” Lichtenberger said. “I've been working pretty hard on my game, I have a lot of great people around me, and yeah, I think that's really why I'm having success. It's not just my own efforts and motivations and inspirations, it's the people I work with and their good vibes; it's a whole collective experience." 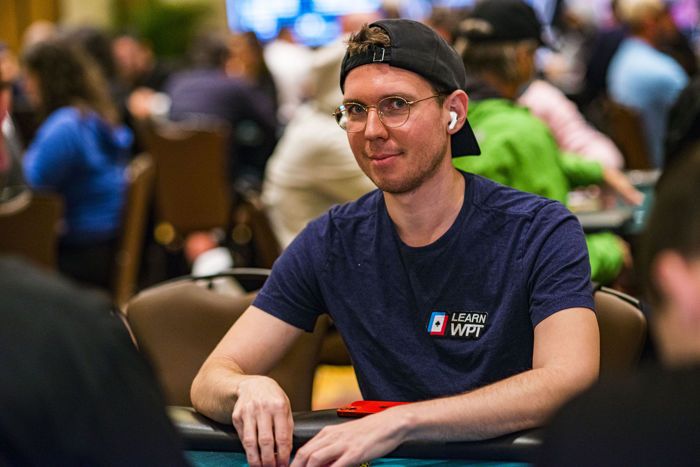 The victory came after a four-hour heads-up battle against Alex Foxen, who in turn pocketed $515,587.

"Alex is a great player, that goes without saying,” Lichtenberger said. “And we had a super tough match. And I was lucky when it mattered most in the all-ins, and I think I probably got outplayed in a few spots, to be honest, but yeah, it was incredibly fun and very spirited."

Now looking to make a deep run in the Championship Event, Lichtenberger explained to PokerNews how he adapts to the larger field in the smaller-buy-in event.

“As far as how you adapt your strategy, people aren't maybe playing as technical, so to speak, so there's a little more leniency with what kind of hands you can play and how aggressive you want to be. It's more freestyling, that's kind of how I think about it.”

Later in the day, a cluster of notable names were scattered across just half a dozen tables in the southwest quadrant of the Grand Ballroom. 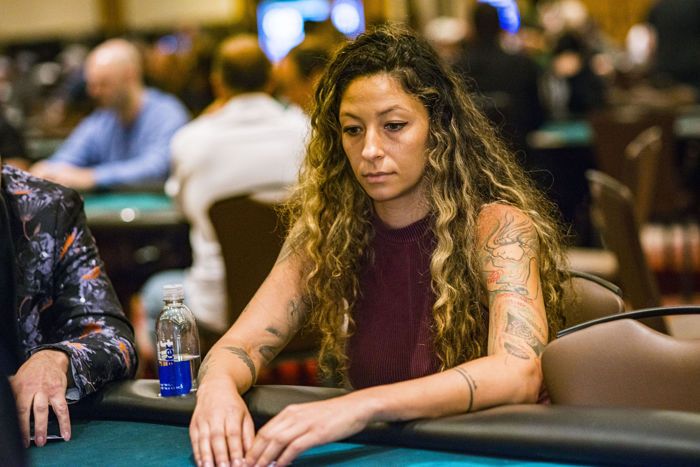 Meanwhile, defending champion Brek Schutten sat in the four-seat at Table 4, just a few feet away from the player he defeated last year to win the title: Steven Snyder.

Sitting at the nearby Table 10 in the eight-seat was Adam Hendrix, who had recently become one of the chip leaders in the tournament with a stack of 900,000, while five-time WSOP bracelet winner and Florida resident Jason Mercier was grinding it out a few tables behind Hendrix.

The Alaska all-time money leader took a minute to chat with PokerNews as players took a second break. He said his Day 2 had been “pretty smooth" up to that point.

“I won a big pot with kings to ace-queen early, and that sort of helped it out,” Hendrix said. “And, you know, just a bunch of small pots here and there."

Hendrix is fresh off of a high-roller victory at the US Poker Open in Las Vegas, where he took down a $10k No-Limit Hold’em event to win $211,200 after overcoming final table big stack Jonathan Little. 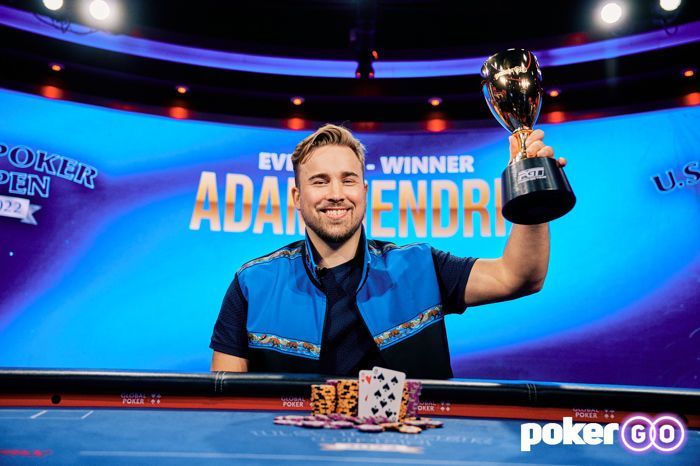 "That tournament was interesting because Jonathan Little had every chip at the final table, so I was just sort of a bystander for a while,” he recalled. “And then I got pretty lucky versus him a few times, woke up with some hands that I could call him with, and then from there I just took it down."

While Hendrix said his strategy wouldn’t change too much now that he has a big stack, he did say he will be on the lookout for opportunities to use it to his advantage.

“I can apply some pressure maybe in the next few hours on the bubble and hopefully make Day 3."

Players returned from dinner to tables now featuring stacks of rectangular time chips, as well as digital shot clocks giving players 30 seconds to make each decision before having to sacrifice a precious extension.

Toward the back of the Grand Ballroom, poker coach Lexy Gavin raked in a nice pot at Table 30 with her aces still face-up as the dealer washed the board. A few feet away, all-time Connecticut money leader Stephen Song and young Florida native Landon Tice battled it out on the same table.

Before too long, the tournament director paused the clock and announced the start of hand-for-hand play. 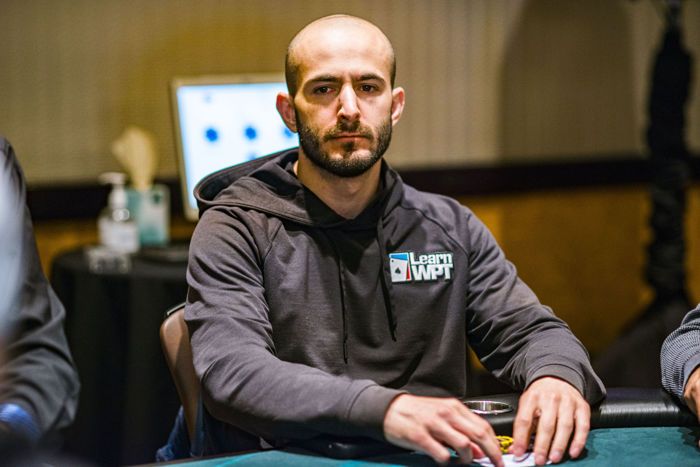 Altman, who had his opponent well covered, mulled over a call and eventually put his chips in, turning over

for bottom pair against the nut straight of Failla with

“I tried to get him to fold!” Failla screamed through a thick New York accent as the dealer waited to run the board out. “He wouldn’t fold a pair to me!”

on the turn was the last thing Failla wanted to see as Altman picked up the nut flush draw, but his heart returned to his chest when the

“Marshall, how do you roll off a spade on the turn there!?” someone at the table asked the dealer.

“That turn took about two years off your life,” Altman laughed to Failla.

The money bubble burst a few minutes later at another table when Schutten, the defending champion, picked up kings in to bust David Coleman, who called off in the four-bet pot to no prevail as the board ran out 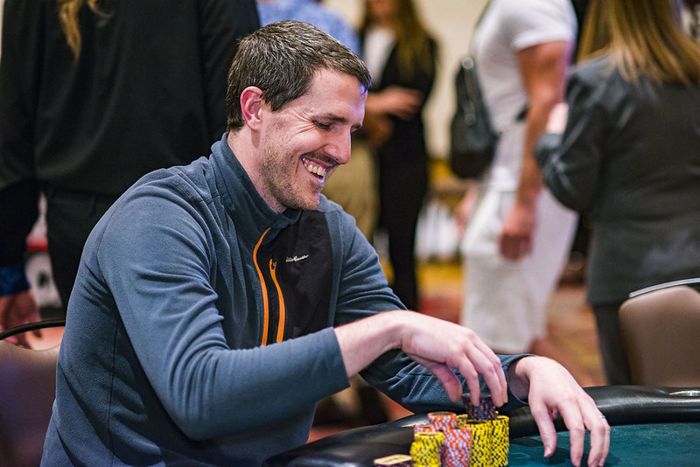 The remaining 252 players cheered as the tournament director announced they were in the money and guaranteed a minimum payout of $5,650. By the end of the day, just 99 players remained all in the hunt for the WPT title and a first prize of $1,000,300.

Follow the action further as as Day 2 of the WPT Seminole Hard Rock Poker Showdown closes out by checking out WPT's live updates.