partypoker
Trusted
This article was added by the user Matthew Cox. TheWorldNews is not responsible for the content of the platform.

Mikita Badziakouski Wins Event #2 at SHRS Europe; Can Koon Catch Up on Sunday? 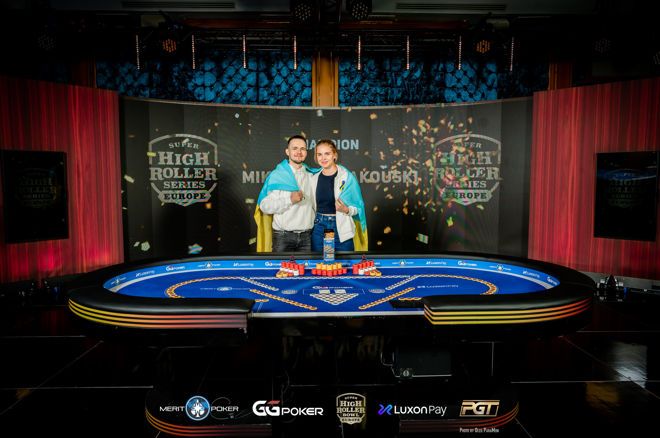 The Belarusian, who was shrouded in the Ukrainian flag as the final cards fell, locked up the $756,000 first prize and his first win since taking down the $50,000 High Roller at the 2021 World Series of Poker.

This was Ivey’s fourth cash of the combined Triton Poker/SHRS Europe series, and he moves into third place on the PokerGo Tour leaderboard with the runner-up finish.

Jason Koon continued his solid run through the combined series with a third-place finish, and Stephen Chidwick picked up his second cash of the series in fourth. Lun Loon finished in fifth place and Wai Kiat Lee made another Short Deck final table after finishing in second in Triton Poker’s Event #3: $75,000 Short Deck.

Ivey also extends his lead on the SHRS Europe series leaderboard with the finish, which puts him over $2.2 million on the series. Badziakouski jumped into fifth with the win and Koon makes an appearance in eighth on the heels of his third-place finish. The top finisher at the end of the series will take home the SHRS Europe Championship and a $25,000 bonus.

Ali Imsirovic remains in the hunt yet again this week, and he has secured at least $64,000 in prize money, meaning he will add to his lead on the PokerGo Tour leaderboard with a cashing finish. Koon is also back in the mix, continuing his consistent run of Day 2s in North Cyprus. Andras Nemeth will look to add another victory to his impressive week, while Matthias Eibinger looks to do the same after also winning during the Triton portion of the festival.

Each of the returning nine players has their sights set on the top prize of $432,000.

Click for live updates from the PokerGo Live Reporting team

The livestream will kick off once the final table is reached on Sunday, April 10 and the action will air with David Tuchman and Brent Hanks doing the commentary on the PokerGo YouTube channel. Action is expected to go live after the first elimination when the event begins at 7 a.m ET and 4 a.m. PT.

Save $20 on an annual subscription to PokerGo by using the code “EU22WEB” at check out. Sign up here.