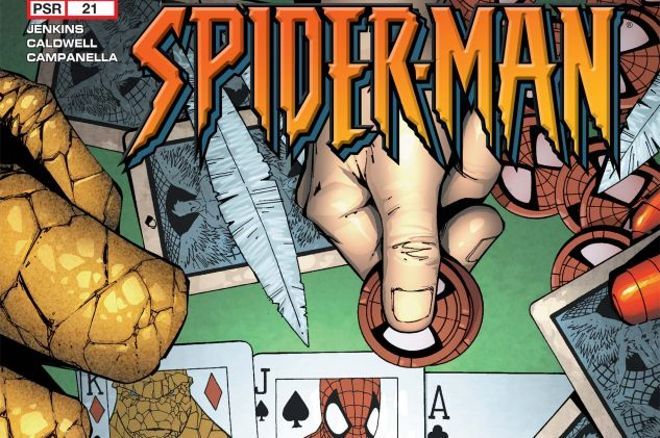 There’s no denying I’m a big comic book geek – I even wrote a poker-themed comic book called The World Series of Zombies (WSOZ) back in 2015. I was recently flipping through some comics at a flea market and came across a copy of The Spectacular Spider-Man #21, which was released back in January 2005.

The comic caught my eye thanks to the cover art by Studio F, which featured several playing cards in what appeared to be a game of poker. Given my love of comics and poker, I picked it up and was glad I did as it turned out to be an entire issue devoted to a single game of poker played between a bunch of super heroes and one villain.

The comic was written by Paul Jenkins at the height of the poker boom, and I just had to know more. I reached out to Jenkins on Twitter and much to my delight he not only responded but also agreed to do an interview about the issue. 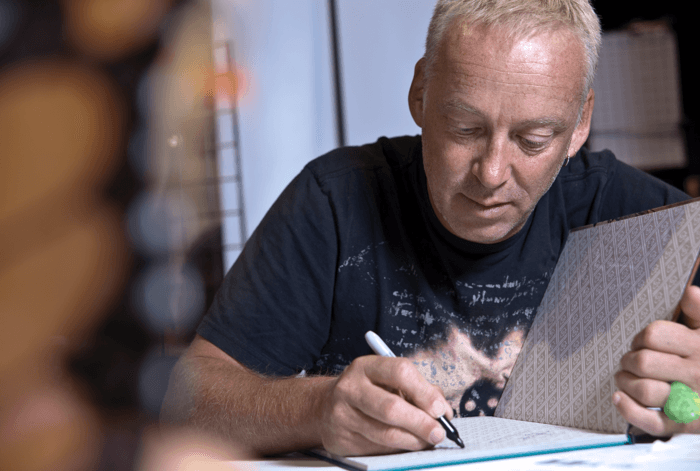 PokerNews: When and how did the inspiration come to write an issue of Spider-Man based on poker?

Jenkins: I happened to be watching poker on TV - not sure if it was a World Series of Poker event or not - and I was struck by the dynamic between one of the players and his opponents. I cannot remember which player it was (he wore glasses and I think may have had a beard) but he’d taken the role of villain, and he was just antagonizing the hell out of the table. And he was winning.

It struck me right at that moment that a poker showdown could be the ultimate expression of good versus bad, and since I was a fan of the game I decided to write an issue of Spider-Man about it. There’s just something so pure about the intensity of a showdown - it contains all the elements a good Spider-Man (or superhero) story would ever need. 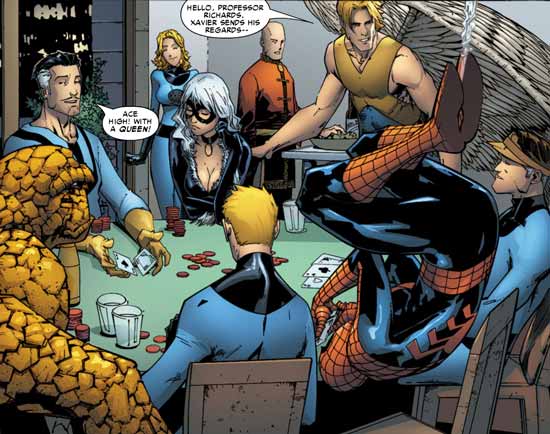 PokerNews: Did you have to do anything special to convince Marvel to let you do such an issue?

Jenkins: No, they had pretty much handed me the keys to the castle in those days, as they were coming out the back side of their bankruptcy. I’d written a lot of their core books and had been lucky enough to help rebuild Spider-Man, Hulk and many others. I wrote the origin of Wolverine for Marvel, and so they obviously trusted me to do my thing. At that time, I was writing 18 Spidey stories per year and loving life. I think my editor simply understood that the premise was sound - a hand of poker can contain bravery, psychology, lies, bravado… all of the stuff that makes for a good story.

PokerNews: How did you go about deciding who would be playing in the poker game? I loved that you included Angel from X-Men and made the choice to make Dr. Strange a terrible poker player! Also, Kingpin is one of my all-time favorite villains, so was great to see him there.

Jenkins: That’s such a great question, and I’m glad you noticed the odd cast of characters. The Thing and Reed Richards have always been associated with poker, I believe, and so their inclusion was natural to the story. Angel was a good choice because he’s an enigmatic character and I thought he would be a sort of inscrutable poker player, in the mold of Phil Ivey. Black Cat is another character we might not associate with poker, though I felt she’d have a great table presence. But my favorite character to include was Doctor Strange. He’s the Master of the Arcane, a practitioner of magic, so he’s supposed to know all the secrets of the universe. But as you know, sometimes people are just terrible at poker. I loved the comedic angle of having Doctor Strange be completely clueless, and there was a great joke about him simply materializing cash from thin air and buying back in after he’d gone all in with a Queen-high. I loved that little bit. 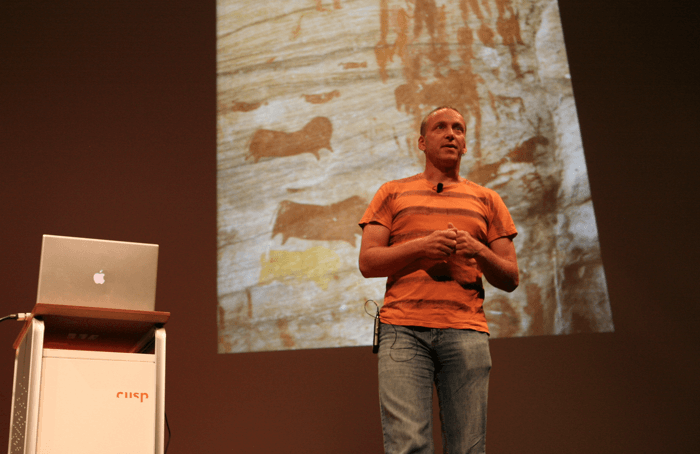 PokerNews: What did you know about poker at the time? In 2005, our industry was experiencing unprecedented growth so the timing was in line with poker permeating the mainstream.

Jenkins: Yeah, I was a huge fan of poker in those days. I still catch a poker show when I see one and have any spare time. It’s a good way to unwind because each hand is usually pretty interesting, and has lots of twists and turns. I would say I got very interested, like many other people, around the time of the poker boom.

PokerNews: You mention Chris Moneymaker in the issue. How did you know who he was? By the way, he wasn’t aware of this issue until I mentioned it to him and now he’s going to buy some copies!

Jenkins: Well, I think Chris’ win in the main event was probably the ultimate moment at the time of the boom. I mean for one thing, his last name is Moneymaker, so that’s a superhero poker player right there! But there was so much in his story the year he won, such as the way he made it into the tournament, or the way he went up against all these established pros and won.

I mentioned bravery above. There was a moment during his run to the title that really encapsulated everything exciting about poker, and that was when he went all in with absolutely nothing, and just stared his opponent down. I think that might have been one of the actual real-life moments that inspired the story. The true measure of a hero is always in their mind and not in their superpower. 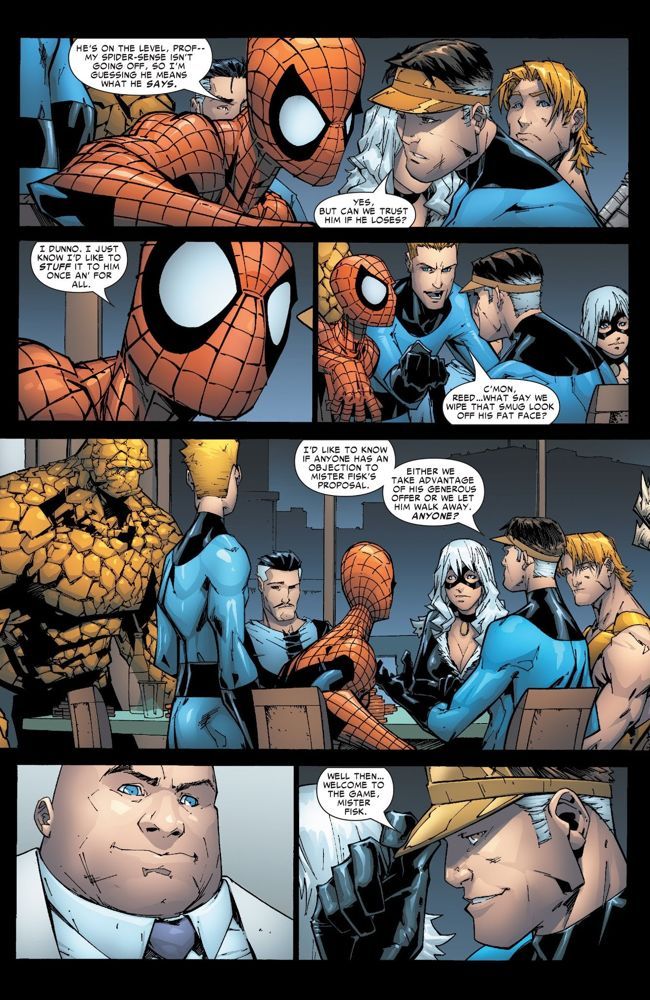 PokerNews: Do you play poker? If so, when and how did you learn the game?

Jenkins: I love to play Texas hold’em if I get the chance, though my friends and I in the Atlanta area don’t play as often as we used to since the advent of COVID slowed things down. I suppose I learned - like a lot of people - when poker became really popular in the early 2000’s. I certainly watched the Main Event every year, and that was something we’d talk about quite often (as well as a lot of the other tournaments). I’m not a bad player; fairly disciplined and usually don’t call too much or bluff too much. I like to wait and strike, only to watch with horror as someone manages to pull a full house against me with their 7-2 off-suit. It’s my thing.

PokerNews: Any other fun stories or memories regarding that issue?

Jenkins: Yeah, in fact you’re not the first poker person who’s taken note of this issue. When it came out I had two or three pros run by my table at conventions and ask me to sign because they’d seen the issue. We must have done something right. Every single person who likes this issue gets that a great battle is won in the mind, not just physically.

PokerNews: What projects are you working on now?

Jenkins: Right now, we’re working on the release of a new series called Slackerverse. I came to Marvel when they were in bankruptcy, and so much of my work (Civil War, Wolverine: Origin, for example) has been used as the source material for the films. So, I have an apology to make to everyone: it’s partly my fault. With my company, META-X Studios, we’re building an entire new world of messed up characters with awful superpowers, Static Boy (he can harness the sheer magnetic power of nearly seven balloons!), Hyperactive Girl (the Caffeine Teen), or School Bully (your wallet is his lunch money).

We’re at metaxstudios.com, if anyone would like to check that project and others out. We’re developing it as a digital card game, so you never know, poker players might like to join in and relax with it. There are hundreds of characters.

In fact, now that you’ve reminded me about poker and its connection to superheroes I need to make a poker character for our new project.