partypoker
Trusted
This article was added by the user Scarlett Jones. TheWorldNews is not responsible for the content of the platform. 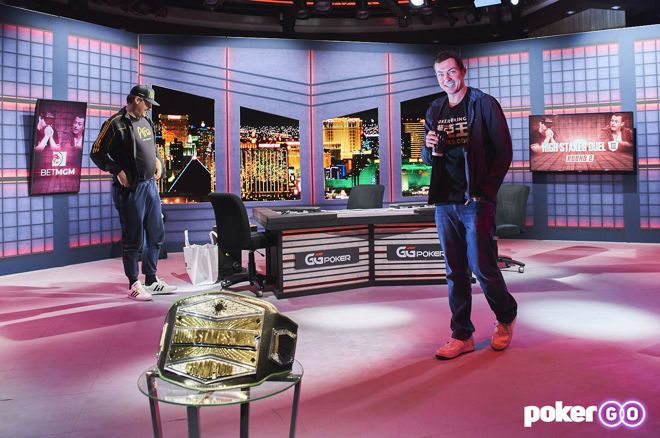 If anyone can make a big lay down it’s Phil Hellmuth, but this hand really puts his white magic to the test.

We all know Tom Dwan, who was recently featured in this PokerNews article about his rise in poker, loves to battle for almost every pot and this hand shows how his aggressive and loose image can sometimes work wonders. The hand took place in PokerGO's High Stakes Duel III Round 2 and it began with the blinds at 1,000/2,000 when Hellmuth (104,000) limped holding the

Hellmuth, who often limps, could be opting to use a limping strategy because he may believe he has an edge over Dwan when playing postflop. When you believe you have an advantage over your opponent you should play as many hands against them as possible, which means keeping it cheap at first.

flop. Hellmuth, who paired his six, had to decide what to do. What would you do with his hand in this spot?

Hellmuth’s hand is pretty good as middle pair is far stronger heads up than it would be in a full-ring game. Hellmuth can comfortably continue when facing a raise as this is a heads-up match and Dwan’s raising range should be wider than usual. Hellmuth is incentivized to bet for protection from any over cards that Dwan could have.

Dwan has various draws and worse hands that might call a bet, so this is a spot where I think a bet is a pretty strong option. However, Hellmuth didn’t agree as he checked it back. Now if Hellmuth’s “white magic” sense is tingling and he knows that Dwan has a strong hand then he should keep the pot small by checking.

appeared on the turn and Dwan bet 3,000. It seemed like a spot for Hellmuth to make a reasonable call. He achieves very little by raising as Dwan will always call with his premium-made hands and high-equity draws.

Indeed, Hellmuth just called and the

completed the board on the river. Dwan would use a lot of hands on the turn as a bluff that has now improved to beat Hellmuth, such as straight and flush draws. There are still many missed draws and junk hands that Dwan may use to bluff the river. 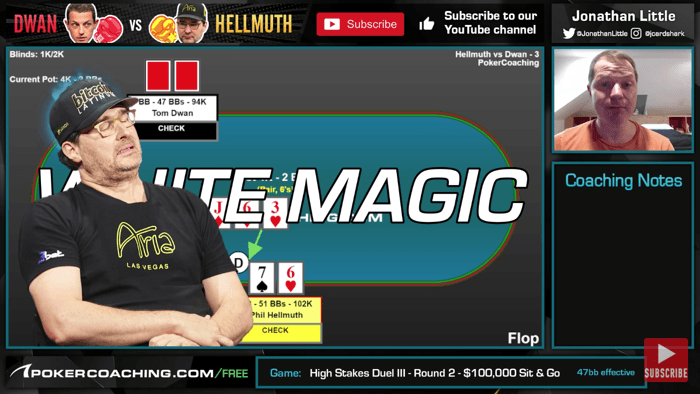 Dwan did fire out 8,000 and Hellmuth had to decide whether his opponent had it or not. Dwan has polarized his range with this larger bet size to premium-made hands and bluffs, so now it was up to Hellmuth to determine which he thought it was. If Dwan were to use a smaller bet size he would widen his value-betting range to more marginal made hands such as an eight or a weak jack.

Hellmuth’s decision would be made easier if he held blockers to the strongest hands that Dwan could have, such as having a diamond that would make it even slightly less likely his opponent had a flush.

Hellmuth’s specific hand blocks Dwan’s bluffs and does not block his potential value hands, which should make this an easier fold. However, Hellmuth wound up making the call and Dwan promptly rolled over the

for a winning straight.

Sometimes the white magical powers do not work. That said, if Hellmuth was confident that Dwan would always bluff the turn and river then his call becomes more reasonable. Though I must mention, if Hellmuth had chosen to bet the flop, the outcome of this hand could have been very different.

For more on this hand check out my breakdown in the following video:

Jonathan Little is a professional poker player and author with over $7,000,000 in live tournament earnings. He writes a weekly educational blog and hosts a podcast at JonathanLittlePoker.com. Sign up to learn poker from Jonathan for free at PokerCoaching.com. You can follow him on Twitter @JonathanLittle.