partypoker
Trusted
This article was added by the user Ezra Clark. TheWorldNews is not responsible for the content of the platform.

Was Shoving with Big Slick in a Hustler casino Live $634K Pot a Bad Play? 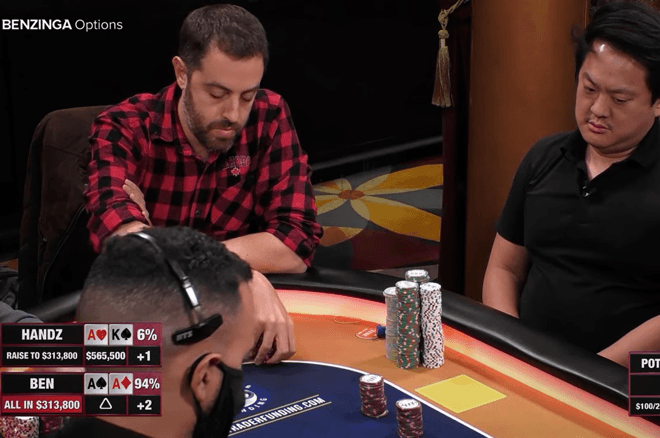 Friday's Hustler Casino Live stream was perhaps the best and most memorable one ever, and Garrett Adelstein, who was dancing it up at Coachella, wasn't even in the game.

While we could feature a dozen or so hands from the stream, there's one in particular — a $634,000 pot — that most caught our attention. And we're curious to know what you think of the play in the aforementioned hand (vote in the poll below).

The game was $100/$200/$400 no-limit hold'em with around $2 million on the table. Chips were flying around like the money didn't even matter to the competitors for seven hours. One player, Alan Keating, had multiple six-figure swings, and Wesley Flan turned $50,000 into over $450,000 (part of it in the game after the stream ended) after busting his initial buy in, the second time he'd spun up a stack this week.

New Player Gives Most of Massive Winnings Back 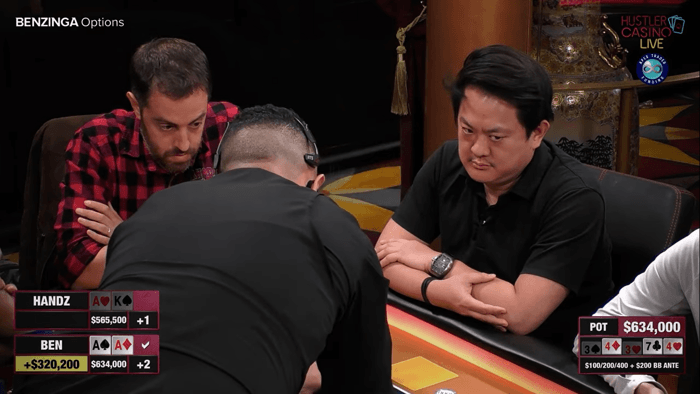 A new player on HCL, who goes by the name Handz and bears a striking resemblance to Green Bay Packers All-Pro quarterback Aaron Rodgers, filled Adelstein's void with some loose-aggressive play, and a hefty bankroll. But that aggression would inevitably cost him dearly in the largest pot since the show launched in Summer 2021.

In that hand, Handz raised to $1,000 from early position with

. Keating, who had a VPIP over 80% on the day and played any two cards, called with

in the small blind.

They ran it twice, and the first board came out

, and the second run-out was

Dynamics of the Hand

The hand on the surface may seem fairly standard to some and a bit too aggressive to jam with Big Slick given the stack sizes to others. But there were some dynamics at play that we haven't yet mentioned, which could sway your opinion one way or the other.

Both players were clearly representing monster hands. Handz had been continually aggressive throughout the stream and was up enough to purchase a brand-new Lamborghini entering the hand. Lee had also built up a huge stack, but he had been playing extremely tight the previous 90 minutes or so. In fact, he folded

It was clear to viewers and Hustler commentator Nick Vertucci that he was pretty much only playing monsters the rest of the way. Lee even said following the enormous pot that he was going to leave earlier but didn't want it to look like a hit-and-run.

So when he raised it up to $90,000, his range was extremely narrow and it was highly unlikely he was bluffing or had anything weaker than queens.

That said, on the other side of the coin, Handz may have assumed that his opponent would only call to an all-in bet if he had aces. It's possible a player who was clearly trying to ensure he'd go home with a big win would fold kings, and almost certainly queens. Of course, Handz may not have realized that Lee had tightened up so much as, unlike the viewers, he couldn't see the hole cards.