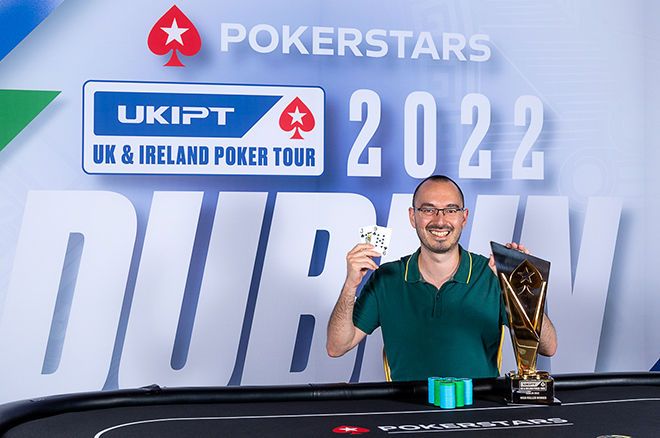 The 2022 PokerStars UKIPT Dublin festival's largest buy-in event, the €2,200 High Roller, has crowned its champion and the last player standing from a field of 53 was none other than Will Kassouf.

Kassouf is a vocal, polarising character who has as many defectors as he does fans, but he let his poker do the talking and to great effect. He walked away with €33,410 of the €102,820 prize pool.

Day 1 saw the 53 entrants whittled down to the final table of nine. Terry Jordan bought in six times but could not progress deeper than 18th place with only seven spots paid. Others who contributed to the prize pool but saw no return on their investment included Leon Campbell, Kully Sidhu, Chris Dowling, and final table bubble boy Sergejus Jakovlevas.

Kassouf found himself at the top of the chip counts with only nine players remaining. His 480,500 stack kept the chasing pack at bay; Niall Farrell brought up the rear with 67,500 chips when the average stack was 176,667.

Two of the finalists knew they would crash out and not receive a payout, which is far from an ideal situation. Gary Thompson was the first of that duo. Ivan Tononi joined him on the rail soon after.

The Return of the "Wonderful, Accessible and Familiar" UK & Ireland Poker Tour

Irish legend Dara O'Kearney was the first High Roller to finish in the money places. O'Kearney secured a €5,400 payout for his seventh-place finish. Seamus Cahill was eliminated in sixth for €6,940 with Jason Tompkins, a player O'Kearney rates very highly, busting in fifth for €8,740, which ensured there would be a non-Irish champion.

The second High Roller title Kassouf eluded to in his celebratory tweet refers to the €10,300 High Roller event at the 2016 EPT Prague festival. Kassouf was heads-up with Canadian Patrick Serda and agreed to a deal that saw him walk away with €532,500 to Serda's €719,000 so that he could celebrate his birthday with a victory and a trophy.

The €1,100 UKIPT Dublin Main Event, the first in the Emerald Isle for six long years, saw 80 players buy in on Day 1A. Only 12 of them finished the flight with chips in front of them, and nobody bagged up more chips than Leon Campbell. He finished Day 1A with a colossal stack of 678,000 chips with Youness Barakat being Campbell's closest rival with 274,000 chips.